A 'point' of cayenne and other fineries of sauce sorcery

The saucier is the first among equals in the classic French kitchen.

It is no wonder. The word pronounced in proper French sounds a bit like "sorcerer." And that is what the saucier is, a maker of magic.

Chef Tony Marano, who is teaching sauces to us as part of the Culinary Foundations I curriculum, is a big believer in the magic of the kitchen.

"But don't confuse magic for mojo," Chef Tony says. "Magic is the way we explain science that we don't yet understand."

Aw, man, no! The magic explanation is more than good enough for me. Taste a well-made espagnole or perfectly balanced hollandaise. That's magic.

Sauces come from combinations of butter and flour and water flavored with meat bones and chopped vegetables and butter combined with egg yolks and a dash of vinegar. Oh, and a "point" of cayenne -- the amount that fits on the point of a knife, that is.

What could at first reading seem like composting materials are the ingredients with which the saucier makes magic.

The magician we are learning from -- Chef Tony -- is modest yet factual about his sauce-making abilities. He has whipped up a half-dozen sauces from scratch before our eyes this week and then patiently walked us through the steps it takes to do it the way he does. We are thrilled to need a lot of practice.

Chef Tony was saucier for at least one French restaurant in the Bay Area, where he ran a station that produced all the primary sauces and many, many variations of them every night. 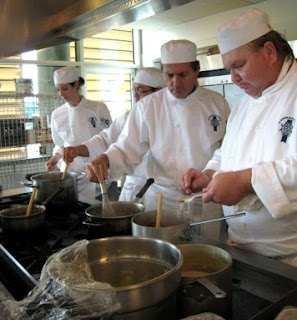 In class on Thursday, his magic -- or was it his mojo? -- was on full display as he demonstrated the makings of mayonnaise and hollandaise, both egg-yolk based sauces. When finished, we all eagerly lined up to taste, and as we passed the bowls for a dip, Chef Tony allowed as to how "this isn't the best hollandaise I've made."

He could have fooled all of us. There were plenty of "yums" and not a single "yuck." It was by far the best hollandaise sauce I had ever tasted.

Or had I tasted magic?