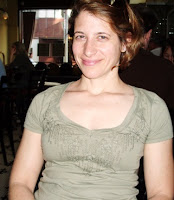 Wickett survived, as another chef was eliminated. But her reputation and ego were bruised in the judging, shown Wednesday evening. What head judge Tom Colicchio said in his blog:


Laurine opted to make a pork butt rillette, but the problem was that she didn’t know how to make it. She thought it was a braised meat. No, no, no – you confit it in pork fat first, so that the water is forced out and is replaced with fat. After you’ve completely cooked the meat over several hours on a low temperature submerged in fat, you take it out, whip it up with a fork (or a mixer with a paddle), slowly incorporating more of the fat with which you cooked it, and you end up with very lush, rich, unctuous meat. By just braising it, Laurine wound up with a stringy, watery dish. She really screwed up. ... At least her chutney and salad were quite good. … Dana did say that she thought the texture of Laurine’s dish was like cat food … it wasn’t.


Wickett owns Left Coast Catering in San Francisco. She is the last of three Bay Area competitors still on the program.

(As an aside: One is led to wonder how the editor-in-chief of Food & Wine magazine knows what cat food tastes like.)

(Photo credit: www.bravotv.com)
Posted by Michael at 9:03 AM