Everyone, including the dog, ate my homework 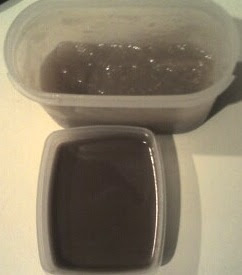 Here's what transpired as I endeavored to take on techniques learned in the first four weeks of classes at the California Culinary Academy:

* On Saturday, I found veal bones at a local meat market, and that led to my making a brown stock. To my delight, it congealed nicely, just as I have seen in school, where we are under the careful supervision of the master chefs who are our teachers.

* On Sunday, I prepared to braise two meaty beef ribs, for which I had asked the butcher to leave the rib bone long. I dried the meat, tied it to the bone and browned it. Forgetting to season it before it was browned was a mistake, I admit, but the quality of the sauce pretty much made up for that.

* Two and a half hours of cooking time left the meat tender on the bone and the pan drippings rich with the meat flavor and that of the mirepoix (onions, carrots, celery). I strained it, skimmed off the fat and added some of the brown stock. Now came sauce-making time.

* Into the concoction, I added a few ounces of diced fennel and the rubies from one pomegranate. The combination was Chef Tony Marano's suggestion, saying the contrasting flavors would complement one another and add a sweetness to the finished sauce. He was dead-on correct, and the resultant sauce, after two more strainings and a reduction by half and then half again, was the hit of the meal.

* Green beans called for a béchamel sauce, as described by Julia Child in her "Mastering the Art of French Cooking." So I used clarified butter and flour to make a roux, stirred in the scalded milk, flavored it with onion, bay leaf and a whole clove. It came out very tasty, but the texture was a tad pasty. More milk might have helped.

The short ribs were falling-off-the-bone delicious, and I must pronounce my first major venture into multi-tasking a French meal a success.

Can coq au vin and sole meunière be far behind?

(In my rush to serve dinner, I neglected to take photos of the finished plates. This photo shows the gelatinized veal stock and the deep brown espagnole sauce.)
Posted by Michael at 5:53 PM