Gather 'round for REAL cooking: braising, that is 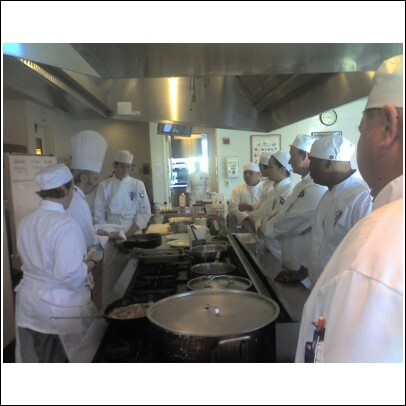 Chef Tony Marano's Culinary Foundations I students took a deep dive today into the world of long, slow, low-temperature cooking that is braiser, or braising. For my money it is the best of the French techniques because of what it can do for an average -- or worse -- piece of meat and for the deep, complex flavors it coaxes from every ingredient.

As Chef John Meidinger said to us as we headed to the braising lesson: "This technique separates the chefs from the cooks." 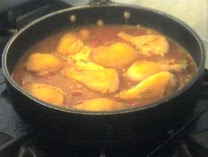 It was the finale of a full week of cooking demonstrations by Chef Tony, with our willing participation, on the seven techniques of classic French cooking.

The paprika chicken was browned in oil, followed by the browning of onion and bell pepper, with a little brown stock and flour for thickening, before going into the oven for a one-hour braising at a simmer. It was finished with a sauce made from the stock, a dollop of sour cream and tomato. 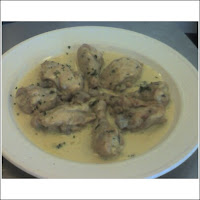 The fricassée was seared in butter at low heat to avoid browning, with a chicken stock and flour for thickening, then into the oven for the braising at a simmer. It was finished with a white sauce thickened with a liaison -- egg yolks and cream -- and in the sauce a "point" of nutmeg, salt, pepper and tarragon.

The tastes were most distinct and most sensational, the highlight of a strong week of cooking.

We left the class abuzz with the possibilities, including plans being made for weekend meals. Mine will be braised short ribs in a brown sauce with fennel, over garlic mashed potatoes.

(Top photo: The Culinary Foundations I students gathered 'round the stove top as Chef Tny (second from left, in tall chef's hat) teaches)
Posted by Michael at 6:00 PM