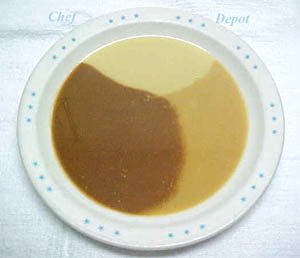 The aroma of raw flour gave way to that of biscuits evolving eventually to rich butter and movie popcorn in the demonstration kitchen/classroom at the California Culinary Academy today.

Slowly but steadily the aroma filled the room as Chef Tony made a roux, first combining equal amounts in weight of flour and clarified butter. Then he slowly cooked it, creating a white roux for use with a bechamél sauce, then a pale roux to make a velouté. The cooking continued on low heat, making the roux richer and darker, ending after several stages in a brown roux, suitable for an espagnole sauce.

Chef Tony showed how to make "magic", moving the roux from one color and aroma to the next. Clearly, there is something magical about how the simple combination of flour, butter and heat can create the thickener for sauces that underpin classical French cooking.

We'll be plunging deliciously and eagerly the rest of this week into the magic of French sauces. Something tells me that the "magic" Chef Tony described will mean a lot of hard work.

(Photo of white, blonde, brown roux on a plate; credit: chefdepot.net)
Posted by Michael at 7:51 PM