Cooking and chemistry: What's the connection?

If you are a disciple of Shirley Corriher or Harold McGee, the cooking-chemistry connection is as plain as, well, as plain as how the heat of cooking makes proteins unwind and rebind. 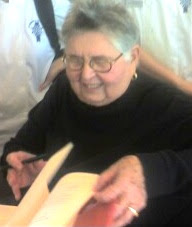 We students of the California Culinary Academy had the great pleasure of hearing Corriher, "the grand dame" of food science, according to Academy Chef Tony Marano, and McGee elucidate prosaically in an hour-long session today at the Academy.

Corriher is a Vanderbilt University educated biochemist; McGee is a California Institute of Technology and Yale University graduate. Both have written much-relied upon books on the science of food.

They were most loquacious and most gracious in discussing their specialties in terms we all could understand. As Executive Chef Tim Grable said in thanking them for appearing, it was difficult to tell who liked it more, the faculty or the students.

A few gems from their conversation with us:

* "Salt suppresses bitterness," Corriher said, so when it is called for even in sweet recipes such as for pastries, it is meant to push down bitterness and thus exaggerate sweetness. So it shouldn't be used necessarily for its own flavor but rather for what it does for other flavors.

* Mold on fresh berries -- straw, blue, black and rasp -- can be minimized by dipping them in water at 120 to 140 degrees Fahrenheit for 20 seconds or so once brought home from the market, McGee said.

* If boiling vegetables, use salt in the water to help keep them nutritious by counteracting the osmosis that occurs in a search for salt balance between the interior of the vegetable and the water, McGee said.

* "McGee says fruit is nothing but a pretty wrapper for water," Corriher said. "I'm still trying to find where I said that," McGee laughingly retorted.

Exposure to such luminaries is a bonus for students at the Academy, and we look forward to other appearances by people atop the lists of experts when it comes to food science, culinary arts and other "foodie" issues.

(Photos show Corriher and McGee signing their books for students at the end of today's session.)
Posted by Michael at 7:44 PM