Bacon is the new bacon 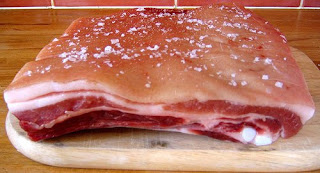 Very little beats the flavor of a piece of pork belly. That's bacon to most of us.

The competitors on Bravo's Top Chef and on Food Network's Iron Chef and Chopped and many other chefs and regular home cooks use it to spike the flavors in many dishes, some of which need it sorely. (My own examples appear toward the end of this blog entry.)

Wednesday's Top Chef competitors included bacon in several dishes, most successfully. The winning Quickfire Challenge dish included a bacon jam, which head judge Tom Colocchio was so taken with that, he said later in his blog, he went home and worked to replicate.

Yet Colocchio also said at one point that bacon enhancement didn't work in every case.

In short, be judicious. Here are a few ways to use pork belly to enhance flavors:

* Cook smoked bacon to crispiness, then crumble onto just about any greens, including a salad.

* Render the fat from pancetta, or Italian bacon, in a large sauté pan just before dropping a pound of fresh spinach leaves into the pan for wilting.

* Wrap pancetta or smoked bacon around asparagus before grilling.

Or, serve it as the entrée, as Thomas Keller's Bouchon in Yountville, Calif., did when I ate there in July. Delicious!
Posted by Michael at 9:22 AM