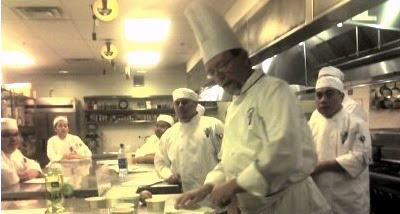 The first six weeks at the California Culinary Academy were equal to a steady drive along a two-lane highway, at 55 mph. Today, with the opening of school's second term, we started up the freeway on-ramp, almost instantly realizing we need to drive faster and with much greater intensity.

Not that the first term wasn't intense. But now that we have basic skills from that term, much more will be expected of us in Culinary Foundation II, Chef/Instructor Dan Fluharty told us.

Chef opened class by administering a 25-question quiz, testing us on what we learned in Culinary Foundations I and Safety & Sanitation classes last term.

Second, we found out that we will cook every day. That included today, when each of us made a pot of chicken stock, after Chef's demonstration.

We're about to merge onto the fast-moving freeway, and our seat belts are fastened.

(Photo shows Chef Dan demonstrating the making of chicken stock, after which eac h of us made our own pot.)
Posted by Michael at 7:35 PM