Being 'top chef' means never having to do dishes 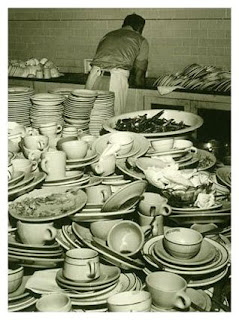 What they don't show you on Top Chef or Iron Chef but that we're learning at the California Culinary Academy:

* Cooking is messy, and someone has to clean. At culinary school, we clean in orderly fashion and in accordance with accepted safety and sanitation practices. As Chef John Meidinger told us in Safety & Sanitation class: "This isn't romantic, is it? You're not going to see this on the Food Network. But you will spend 3% of your revenue cleaning everything in your restaurant."

* All those rich, flavorful sauces take time, lots of time, to make. When a chef opens a container of stock on television, he/she is bypassing the long, hard work it takes to make the stock. Additionally, using off-the-shelf stocks probably introduces a lot more sodium to cooking than should be there.

* Back to sanitation: Saying scant attention is paid to it on the cooking shows would be unfair. But it does tend to get nudged aside regularly. A couple of examples: Double-dipping by chefs when they are tasting something; on Top Chef, head judge Tom Colicchio likes to drop in on the competitors at the height of food preparation. He often ends those brief visits with a handshake, and the chef goes right back to the food, not washing his/her hands.

* Good cooking doesn't always take a lot of time, but some of it does. The condensed amount of time on the shows -- a one-hour time limit for Iron Chef and generally no more than two hours to prep and cook a meal on Top Chef -- makes a number of cooking techniques unrealistic, or it telescopes the work involved so that the viewer isn't getting the true picture.

* There's a good bit of humility and modesty among chefs. At least that's so with the chefs at the Academy. The arrogance, bravado and strutting one sees among contestants on Top Chef and Iron Chef must be for entertainment value; they add nothing to the sauce.

(Photo credit: www.tenhundfeld.org)
Posted by Michael at 9:22 AM