All hail the Incas, for they gave the world spuds

Spud day in Culinary Foundations II was an enlightening trek through six potato dishes, all showing the deliciousness and versatllity of this humble tuber. But before the day's details, a little history.

Potatoes were first domesticated and cultivated 7,000 years ago in what is now South America. Credit the ancient Incas for figuring out that the underground part of the potato plant is edible and even highly nutritious, while the leafy green part is actually poisonous.

The potato plant, after all, is part of the nightshade family, and that includes such killers as belladonna, the species that supposedly felled the Roman legion led by Marcus Arelius in the Parthian war.

Spaniards entering what is now Colombia in the late 1530s first came across potatoes, and they made their way back to Europe by 1570. Now, of course, they are a worldwide staple, as recognized as rice and wheat. 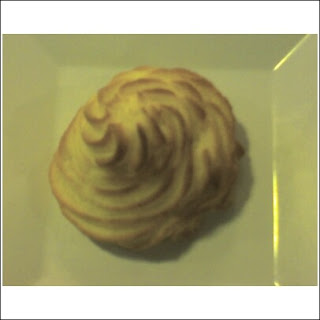 Chef Dan Fluharty showed us six French techniques for preparing and presenting potatoes -- pommes in French -- including the elegant-looking pomme duchesse. (That's one of my efforts on the right.) The dish is made from what are eseentially mashed potatoes, mixed with butter, egg yolk and seasoned with a pinch of nutmeg, salt and white pepper. Then they are piped onto a platter with a pastry bag before going into the oven for 15 or so minutes. The batch I assembled turned out looking and tasting good.

That's a good thing, because it is going to be part of this week's competency exam.