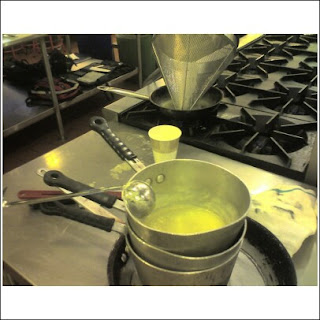 Hollandaise sauce is mine; I have conquered it. Same with Sauce Robert, mornay and an array of other leading and small sauces in the repertoire of classic French cooking.

Even that stubborn stove-top bully beurre blanc has been felled.

What they call in culinary school a competency exam, also known as a practical exam, was held today for sauces. I proved competent in all four, as did every other member of my class in Culinary Foundations II at the California Culinary Academy.

Laying down French sauces as the basis for a culinary education is a smart approach. They feed (pun intended) most of what will follow in fairly rapid order, starting with soups.

Chef Dan Fluharty dove in today, immediately after the competency exam and cleanup. He demonstrated classic French onion soup -- "It's still in vogue, and it's a national soup: French," Chef declaimed -- and cream of mushroom soup simultaneously. There's that darn multi-tasking again.

On Monday, he had sneaked in a demo of the classic of classics in soups, the consommé. It's a highly flavorful clear broth, and most chef educators and restaurant chefs would agree that it's one of a handful of fundamentals that a chef needs to know.

(Photo shows the remnants of my sauce practical exam. That's beurre blanc in the top pot, foreground.)
Posted by Michael at 6:55 PM