The lingua franca of the kitchen

From deglacer to the dish pit, from crowning a tomato to court bouillon, from fariner to forcemeat, the world of culinary arts has its own language. It's a language one must learn quickly, a mix of French terms and long-used English terms that standardize the discussion in the kitchen. 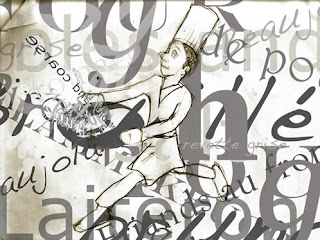 The lingua franca of the kitchen is no more or less arcane than that in many other professions, trades and crafts: It is mostly functional though sometimes awkward, mostly logical though sometimes archaic and mostly takes time to catch onto though not in culinary school.

At the California Culinary Academy, the catching-onto is aided by frequent quizzes in which we students must write definitions of the mostly French terminology and by daily use of the language in class and our cooking exercises.

As the Chef might put it: "Battonet carrots for sauté to go with the pommes duchesse and the chicken ballotine grandmere and a pan sauce."

That is: Cook carrot sticks by simmering in water and completing in melted butter in a frying pan to go with potato purée piped into elegant shapes and baked golden brown and a roll of boneless chicken stuffed with a mousse of chicken and flavorful additions, seared and roasted, served with a sauce made from the pan drippings and other flavor enhancers.

Getting a handle on the lingua franca of the culinary arts brings an energy and an inviting peek at the broad and deep base of knowledge it takes to work in a restaurant kitchen.
Posted by Michael at 8:49 AM