Bringing order to chaos -- in the mind, in the kitchen 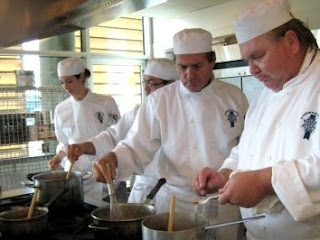 Orderly chaos or chaotic order: Which contradictory statement better describes the atmosphere in the kitchen at culinary school?

Both, is the answer. Initially, and still on some days, orderly chaos has ruled, although we are slowly moving to chaotic order. That is coming with increased skill and confidence and as we work in assigned stations. That allows us to get accustomed to one another's movements and style.

The station at which I work has classmates Rob Park (at right in photo) and Richard Johnson (not pictured) assigned to it, too. We share a 4-foot by 10-foot stainless steel work table, or "deck" as the chef calls it. We also have access to a dozen stovetop burners and two commercial ovens. The entire class of 10 students shares a grilltop, and when needed, we assemble a couple of makeshift deep fryers using big pots.

As the photo depicts, the stovetop is usually crowded with pots and pans and us hovering over them, hands gripping whips, spoons, spatulas and panhandles. Yet we all tend to move with some sense of order, calling out to one another letting others know where we are, especially when carrying a hot pot or bending down at an open oven. Collisions have been few, catastrophic spills nonexistent.

Will the chaos ever disappear as order prevails? No, not in culinary school and not in restaurant kitchens where meal service time is always going to have an element of rush to it.

(Photo courtesy of Kejoo Park Hong.)
Posted by Michael at 7:52 AM